Darkmouth - The Biggest Launch for HarperCollins Children’s Books in 2015. 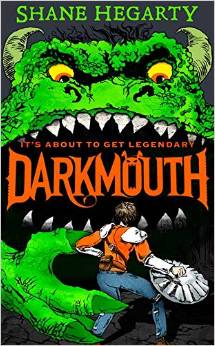 Darkmouth is a monstrously funny debut from the new star of middle-grade adventure.

Legends (also known as terrifying, human-eating monsters) have invaded the town of Darkmouth and aim to conquer the world.

But don’t panic! The last remaining Legend Hunter - Finn - will protect us. Finn: twelve-years-old, loves animals, not a natural fighter, but tries really, really hard, and we all know good intentions are the best weapons against a hungry Minotaur, right?

“Shane Hegarty explodes into the fantasy universe with Darkmouth. An incredible debut. Hilarious and exciting. Terrifying and heart-stopping. Everything a great fantasy series should be. The next big thing is here.” Eoin Colfer, author of Artemis Fowl

“Believe the hype. The relationship between the young hero and his father is touching and real. There are touches of Ghostbusters, along with some Bond-like gadgets, plus a rather Dickensian setting (the mist-swirling town of Darkmouth). This fantasy adventure is a stunning debut.” Sarah Webb

Darkmouth is now available on Amazon