Dolphin Tale 2 - reviewed for What To Do With The Kids 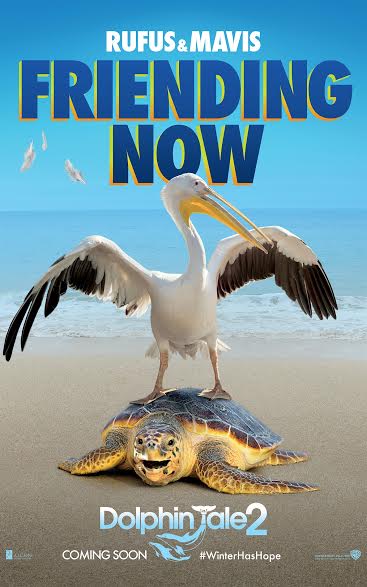 The wailing that could be heard throughout the cinema at the end of Dolphin Tale 2 was not my son empathising with the hardships that the children with prosthetic limbs shown playing with the dolphins were enduring, but rather his devastation that the film was over.  Despite having not really followed the ins and outs of the USDA violations which caused the major crisis in the film, he wanted to watch it all again immediately just to see the dolphins.  My daughter’s similar distress was due to my breaking it to her, admittedly a little bluntly, that her chances of becoming a dolphin trainer were slim, but practising her front crawl more enthusiastically would be a first step.

Emotional fallout aside, Amelia and Charlie loved Dolphin Tale 2.  It’s probably fair to say that what they loved was the footage of the dolphins in the water.  If this had been Warthog’s Tale 2, they may not have appreciated the film so much.  But the dolphins really do steal the show, although the neurotic pelican gives them a run for their money.  Although the focus is very much on the dolphin footage, there are various moral dilemmas and subplots to keep adult brains ticking over.  Watch out for the ultra-pushy parenting action in the middle of the film.

As a novice to the Dolphin Tale franchise, I didn’t realise that the film is based on real life dolphin rescues.  That explains the slightly slow pace of the film but also adds to its feel good character.  There is something slightly reassuring and escapist in a world where terrorists are front page news on a regular basis to spend 90 minutes watching a large group of people working their socks off to save and rehabilitate marine animals.  Being an adult I, of course, cried at the happy rather than the sad moments, but also savoured the beautiful Florida landscape and am now busy digging out my family holiday guide to Florida for future holidays.

Dolphin Tale 2 marks a break with the high octane children’s animations that we’re used to.  However, it is in the style of the traditional family movie, with something for everyone.  All ages will love the dolphin footage.  Older children may appreciate the subtleties of the relationship between the teenage leads; how refreshing it is to see healthy rather than stick thin teenagers on the screen.  Adults may identify with some of the moral dilemmas associated with being on the wrong side of regulations for the right reason, or the clash between high finance and animal welfare.

Dolphin Tale 2 is a refreshing film which leaves you feeling that the world is not all bad.  I found the actors convincing, the story engaging and the dolphins delightful.  I didn’t howl when it finished but I did feel a warm glow of well-being.  Until I faced my own dilemma of how to respond to a would-be dolphin trainer in our land-locked town.