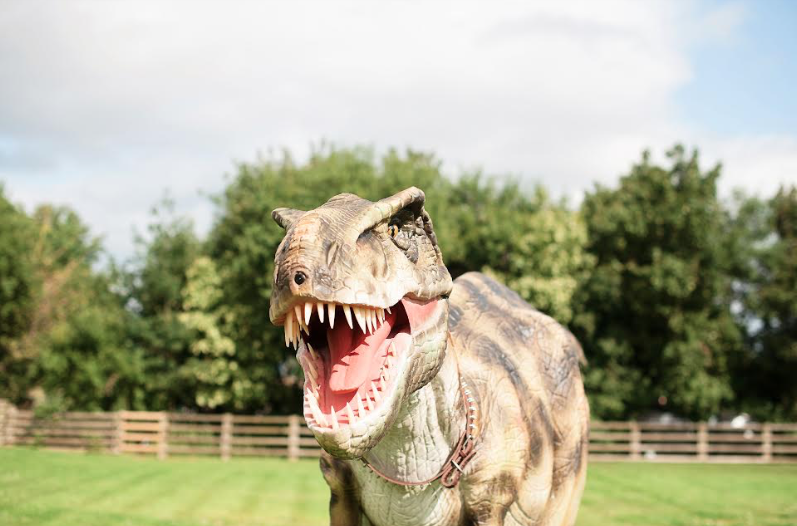 Jurassic creatures will come to life in a pre-historic adventure for all ages this summer, as an immersive program featuring animatronics, live music, interactive performances, and the chance to excavate fossils alongside outdoor cinema screenings of classic dinosaur movies is unveiled 10-13th August, at Cannon Hall Farm in Barnsley, South Yorkshire.

Transforming the farm into a dinosaur activity trail with a dinosaur safari, raptor races and Jurassic obstacle challenge, ticket holders will step into a land before time and be taken on an adventure amongst roaming T-Rex.

Unleash your inner explorer and come dressed ready for the paleontologist’s camp, or go back in time as cave person, ready to strike a pose in the Photo-saur-us Booth! Creators of the Dinosaur adventure, Sneaky Experience, actively encourage audience participation throughout, with their motto: “Don’t just watch it. Be part of it!”

An interactive exploration for adventurers of all ages starts at 10.30am – 4pm, August 10-13th with Dinofarm, recommended for families with children 2-12 years old. Tickets include all Dino activities and outdoor cinema with rolling dino-film screenings PLUS entry to Cannon Hall Farm.

If you’re feeling a little braver, you can walk with dinosaurs as you follow in the footsteps of the ice-age beasts at Jurassic FarmFest, 6-11pm, August 12th, recommended for Adults and children accompanied by parents (PG rating). Alongside some stomping live music, get your lab goggles ready for Spielberg’s 1993 multi-award-winning classic Jurassic Park. Watch in awe, whilst feasting on Dinosaur Bones from local street-food vendors and washing them down with a Jurassic cocktail from the Ice-Age bar as the adventure unfolds across the hilly terrain of Cannon Hall Farm.

Jurassic Farm Fest is presented for one night, and one night only, so don’t miss out on your chance to travel back to a time when Dinosaurs ruled the world and Jeff Goldblum’s hair was super shiny.

Full details which tease at the entertainment, will be released on the Dino-farm: Live Dinosaur Adventureand Jurassic Farm Fest Facebook Page but in true Sneaky Experience style, the sensational line-up will only be fully revealed, once inside, as the gates close behind you.

This is a ticket only event. For more details of the full summer program and to book tickets, visit: www.sneakyexperience.co.uk