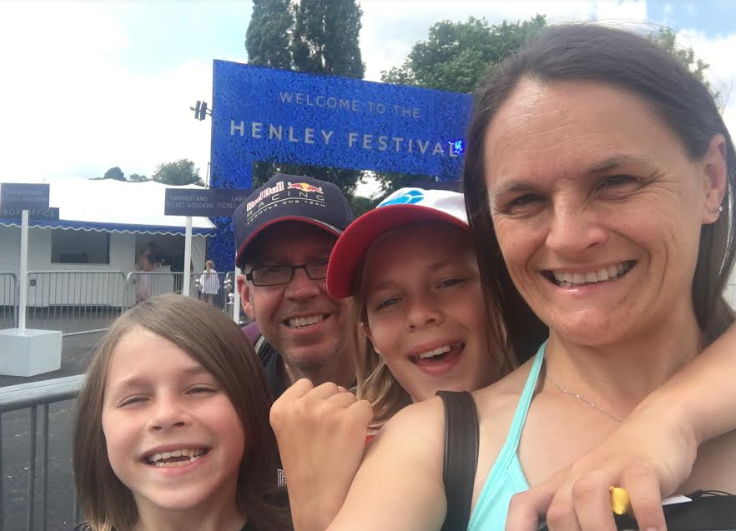 We’ve had some amazingly sunny weather of late, so we were pleased to wake up to a blue cloudless sky for our day out at the Henley Festival Family Sunday in Henley-on-Thames, Oxon.

The thermometer read 25°C, so armed with sun cream, hats and water bottles we set off. Arriving at the site parking was free and was well organised in fields behind the festival site. We were quickly parked and in the queue to get in. The entrance price was £35 for up to 5 people, one of whom must be under 16 years of age. Once past the ticket booths we entered the festival under a large glittery archway. Inside we got to ‘walk the red carpet’ and were greeted by an 8-foot-tall redheaded lady in an amazing long red gown! Perhaps she was demonstrating how you should dress if coming along to an evening performance at Henley Festival; it is a strictly black tie event. But Sunday is all about children and family and the policy today is ‘come as you are” meaning everyone can be comfortable.

We looked at the schedule and my first thought was “How are we going to see everything?” The Family Sunday is on from 11.30am to 3.00pm and thus gives you a short, sharp period of culture before taking tired younger children home for a nap. 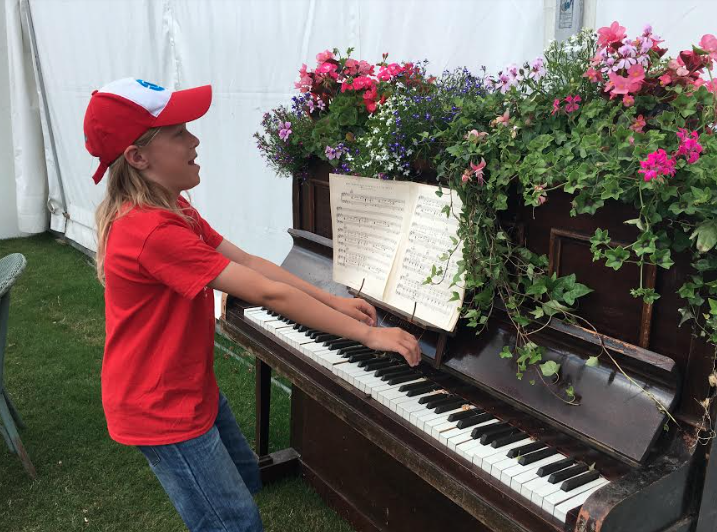 The festival site runs along the bank of The Thames, with boats drifting past and the picturesque town of Henley-on-Thames in the background. As you wander through the site there are performance artists everywhere. My eldest son particularly liked a huge skeleton in a floral dress who ruffled his hair, whilst my youngest, the ‘artist’ of the family, liked Mr Doodle who was filling a huge white wall with quirky doodles and drawings. 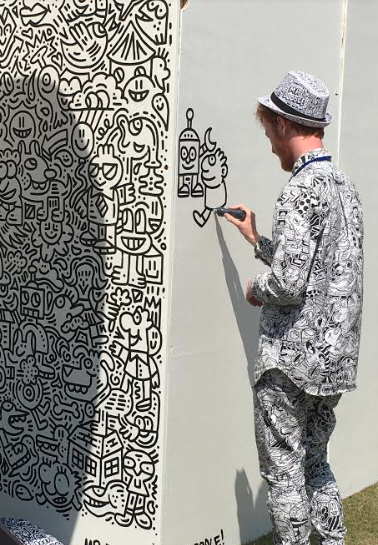 Our first port of call was a large marquee called ‘The Salon’ for a concert by the Henley Music School and Henley Youth Choir. We were treated to a wealth of local musical talent ranging from singers to musicians to drummers. All the performers looked like they were thoroughly enjoying themselves.

Wandering down the long thin site it appeared to be fully accessible to prams and wheelchairs. The site was busy the whole day, but was quite easy to navigate, even with kids in tow.

A disco tent hosted ‘Baby Loves Disco’ and various toddlers (and parents!) could be seen getting on down to hits such as Justin Timberlake and Bruno Mars. A machine blew out bubbles onto the dancefloor and toys and games were available to keep all the kids amused when not dancing. My two boys are 8 and 11 years old, so didn’t want to join in the dancing, despite my pleas for them to dance with me. 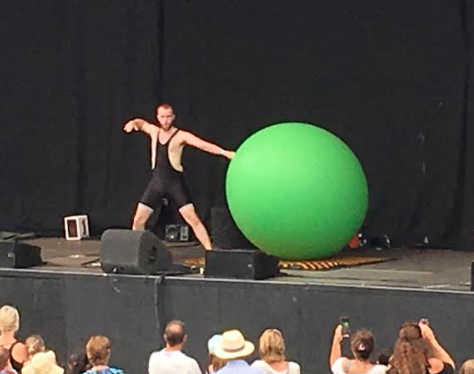 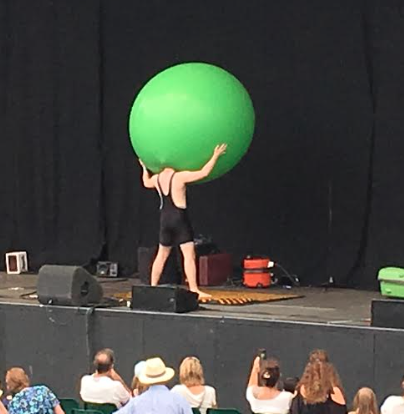 The Floating Stage is the main arena for all the acts appearing at the 5-day Henley Festival. It has a mass of tiered seating for up to 4000 people. As it was hot we found shaded seats and enjoyed watching The Busquitos, a four-piece band who played an array of fun and entertaining songs mixed with comedy. It got the children bopping in front of the stage. They were followed by original comedian Bruce Airhead. He was accompanied on stage by a giant balloon which he blew up using a vacuum cleaner until it was about 5 feet tall. He then donned a unitard, smothered himself in baby oil and climbed inside! Whilst inside he made the balloon ‘dance’ to Mambo No. 5 and occasionally a leg or his head would pop out. It was bazaar but total hilarious and my boys were laughing and clapping along. The finale was for Bruce to burst out of the balloon dressed as Elvis, complete with quiff and sunglasses. Definitely a highlight of the day.

For those who like art there are a couple of galleries displaying works ranging from photographs to pop art to neon illuminated signs. The price tags on most of the pieces were out of this family’s price range, but it sparked a good amount of discussion about how do you put a price on a piece of art, how art is sometimes making a personal statement, how it might ‘speak’ to you but not to someone else….we all felt very cultured when we stepped out of the gallery! 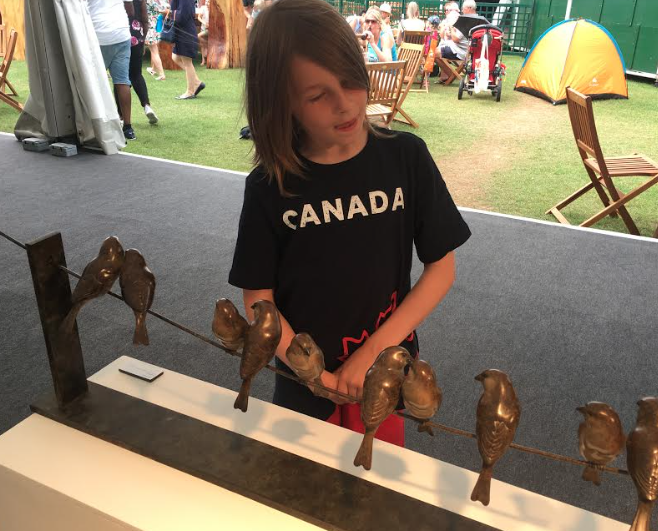 In the relatively short time the festival is open it was hard to see everything on offer. We had to study the schedule and decide what everyone wanted to see most then make a beeline for it to get there in time.

Inside the festival site there was a multitude of stalls and outlets selling food and drink. The festival website stated that food should not be brought on-site and as the timings spanned lunchtime, buying something to feed two hungry, growing boys was going to be inevitable. Food choices included, burgers and hot-dogs, pizzas, lobster, curry, Japanese tataki, pub fare, pancakes and more. We joined a long queue (20 minutes queueing and then 20 minutes wait for the food to be cooked) and bought two burgers, 1 hotdog and a portion of chips which cost £30. Admittedly, they were first-class burgers and hot dogs but we did find that costly. A round of four drinks to accompany our food was a further £16, though jugs of free tap water were also available at the bar we sat in. As the event is specifically aimed at families it would be nice if the food offerings were slightly cheaper or families were allowed to bring a small amount of food onto the site. You are allowed to picnic in the car park, but as the event is only open for 3 ½ hours I think you’d struggle to get out, eat and get back without losing a good chunk of that time.

After lunch we continued along the site and watched a dance workshop being led by dancers from Matthew Bourne – New Adventures. Boys and girls of all ages were shown first a swing dance, then a more floaty contemporary dance. The choreographers cleverly broke the dances down into moves called things like ‘the steering wheel’ and the ‘aeroplane’ but once danced to the music they looked like proper dance moves. 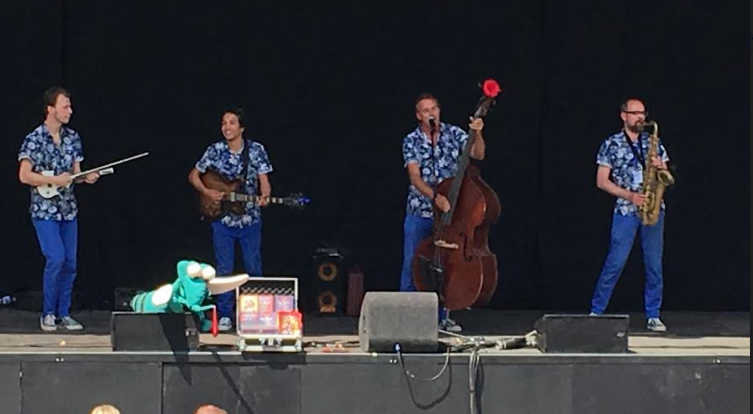 Without doubt the highlight of the day for this family was in the Ronnie Scott’s club where we teamed up with another family to enter the ‘Pub Quiz for Kids’. The compere and quiz-mistress was very funny and engaging and she kept everyone amused with her delivery of the questions. You could feel the competitive spirit of each team increasing as the rounds went on. The culmination of the quiz was a dance-off for bonus points. Sadly our team didn’t win (neither did we come last!) but it didn’t matter as we had been thoroughly entertained for a whole hour, and made some new friends too. 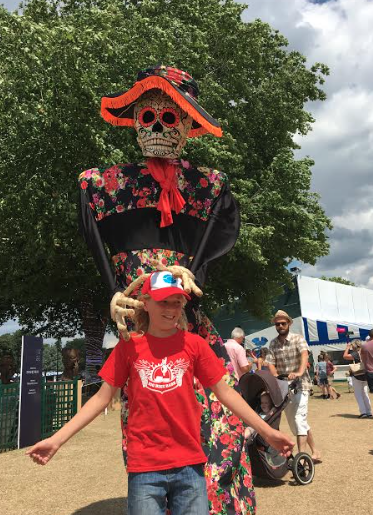 Too soon it was 3.00pm and time to vacate the site. The teams of cleaners were coming in to turn the site around before the evening performances began at 6pm. As we walked back to the parking field my pedometer clocked just under 9,000 steps – so I’d had a workout as well as a fun day out! The boys declared that the day had been “Epic!” and “Really fun” and they’ve already requested that we return next year!