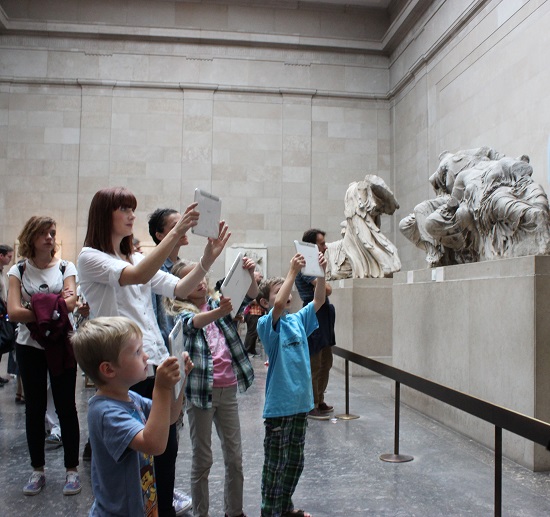 Taking your kids to a museum can be a stressful experience. You want them to enjoy themselves and learn something at the same time, but keeping them engaged for long periods is one of your biggest

challenges. Most museums are pretty good at providing some interactive exhibits, but often these don’t go far enough and your kids quickly become bored and start playing up. Well, one museum is

looking to change all that and make a real difference to your children’s visiting experience.

We were recently invited to road-test a brand new app being launched at the British Museum. The app, which has been designed for both Apple and Android phones and tablets by the company Gamar, uses Augmented Reality technology, enabling players to interact with objects and spaces in a unique way. In short, you can point your device at a museum artefact and watch it come alive, tell you a story, and encourage you to engage, think and learn.

The game we were road-testing is called ‘A Gift for Athena’ and is designed for use at the Parthenon Gallery, in the Greek section of The British Museum. The brief is:

‘Explore the iconic Parthenon in the British Museum like never before. Step back over 2,000 years to the land of ancient Athens and progress through four enjoyable challenges, set by Boreas, the god of the north wind. With each mission, you will delve deeper into the fascinating history of the Parthenon, discover its secrets, stories and statues, and save the day by returning a beautiful gift fo the goddess Athena’.

So what do the challenges involve?

For the first challenge you are given various outline shapes on your screen and you need to find the correct statue to fit the shape. You hold your device up to the statue and if the shape matches (ie

you have found the correct statue), then you are rewarded with some interesting facts about that statue, who it represents, and where it was located on the Parthenon. This continues until you have

For the second challenge you have to find a particular scene from the Parthenon amongst the exhibits – once you have identified this correctly by holding your device up to the exhibit, it provides

you with some additional information on the exhibit and challenges you to a game. The image is divided into a grid and mixed up. Your task it to move the squares to their right position to make up

The third challenge is again to find a particular exhibit, this time of a scene depicting a fight between a centaur and a Greek. Once you have found the exhibit with your device it provides some more

useful information about this particular story in Greek mythology and opens up a game where you have to help the Greek fight and defeat the centaur.

The final game involves looking out for particular objects or scenes from a long frieze depicting a procession. Firstly you are asked to find a particular scene which involving three characters and a

horse – these were expertly sculpted in layers one on top of the other. The order from front to back are mixed up and you have to rearrange the characters back into the correct order. You are then

tasked with finding several objects within the frieze and once you have found these you again getsome fascinating facts about the individuals and objects depicted.

However this isn’t the end of the fun – now that you have completed the 4 challenges there is an extra bonus game, where you have to negotiate your way through the Parthenon to find the correct

temple to offer Athena your gift. This is similar to a maze, and you guide your character along the path with your finger, making sure not touch the sides of the path otherwise you have to start the

So what did we think of the overall experience?

The instructions for the game were simple to understand, starting with a story and letting you know at each step of the way what you are required to do – the kids will have no problem understanding

this. Each challenge provides a map of the gallery so you know which area you need to be in to find the correct sculptures.

about the different gods and how they fit into Greek mythology, about life for ordinary Greeks at the time, and where each of these sculptures could be found on the Parthenon. So rather than just

seeing a random sculptures, you got a real flavour of the sheer scale and grandeur of the Parthenon in its prime.

More importantly the kids loved it and it kept them engaged – it took them about 40 minutes to complete, but we are told it could take anything from 20 minutes to an hour dependent on your

child’s age and the speed they want to go around. The good thing is the app allows you to repeat the challenges, but starting at the opposite end of the gallery and covering different sculptures. So it

could keep your kids busy from 40 mins to 2 hours, which is amble time to be spending in one gallery (other games at other museums may differ in length).

The games aren’t complex and in this age of gaming, some older children may find them a little too simple, but the idea is to help them engage with the artefacts around them in a different and fun

way and it does this to great effect. And it isn’t just for kids either – it’s fun and educational for the adults as well!

We think that this and other games in the Gamar series will add a huge amount of value to your museum visit, keeping the kids engaged, learning something, and hopefully getting inspired by the

objects and stories behind the exhibits.

How to get the games:

If you are interested in checking out one of Gamar’s games, go to your relevant app store, search for Gamar, then download the app for free – then when you plan to visit one of the participating

museums you can purchase the relevant game from the app and download it onto your device.

Currently Gamar have 5 games either available now or coming soon, including: 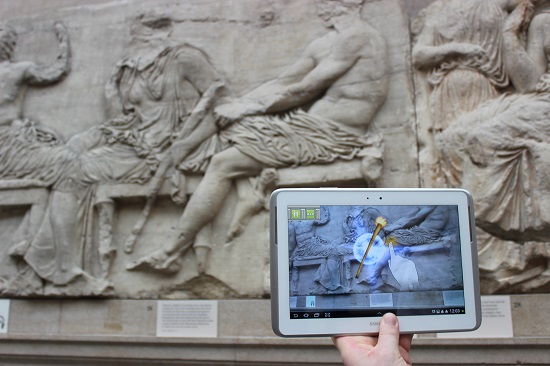