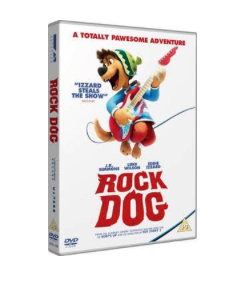 This week we got to take a peek at the NEW DVD release Rock Dog!

The kids, Evie, Poppy, Heath and Lowri,  age 5-8,  all thought the film was super funny and were up for watching it again and again. In fance Heath was really up for a secon watch in sucsession. They loved the main character Bodi and they gigggled through out the film.

The Mail on Sunday say it's  got a “Wonderful performance by Eddie Izzard” and we have to say we agree.

Into Film said, “Kids will love it!” and they really did. This is a great watch for kids all ages, but the age group we had 5-8 really did appreciate the funny, fast and speedy story line. The VOICE CAST: LUKE WILSON, J.K SIMMONS, EDDIE IZZARD & LEWIS BLACK and they put on a great and convinsing performance.

Its a story about Tibetan Mastiffs living on Snow Mountain, a dog’s life has a simple riff; Guard a peaceful village of wool-making sheep from the thuggish wolf Linnux (Lewis Black; Inside Out, The Aristocrats) and his rabid pack. To avoid distractions, Mastiff leader Khampa (J.K Simmons; Whiplash, Spider-Man)forbids all music from the mountain. But when Khampa’s son Bodi (Luke Wilson; Legally Blonde, Charlie’s Angels) discovers a radio dropped by a passing aeroplane, it takes just a few guitar licks for his fate to be sealed: Bodi wants to be a rock’n’roll star. Yet that means defying his father’s wishes, heading to the city and locating the legendary – and reclusive – musician Angus Scattergood (Eddie Izzard; Cars 2, Valkyrie), who needs to write a new song and fast.

If Bodi can put a band together, help Angus with his song, and defeat the wolves’ plot to take Snow Mountain, his life will be in tune. Bodi will become what he’s always dreamed of being: More than a dog…more than a rock god… he’ll be a ROCK DOG!

Sky Cinema, Altitude and Timeless are proud to present Rock Dog, releasing on DVD from 16th October, 2017. Meaning you can get it now ready for the school Half Term.....