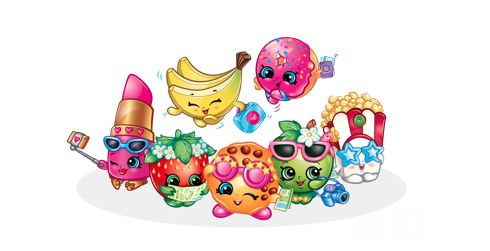 Shopkins are back with a brand-new on screen adventure and new song called ‘Anywhere In The World’ – and they want you to create the official dance routine!

The Shopkins are in good company, ‘Anywhere In The World’ is written by collaborators of Katy Perry and Adele

Following the success of SHOPKINS: CHEF CLUB (2016), the super-cute collectable toys, Shopkins, are back on a screen near you in the brand-new movie for 2017, SHOPKINS: WORLD VACATION, which sees them hopping around the world from Paris to New York to Tokyo.

But, the Shopkins and the Shoppies need your help – they want to dance along to the theme song, ‘Anywhere In The World’, but they’re stuck for inspiration!

So the tiny toys are calling on their UK fans to take part in a dance competition and come up with the official dance routine to the chorus of ‘Anywhere In The World’.

The lucky winner will get to work with international choreographer Christina Andrea – who’s worked with the chart-toppers Jessie J and Pixie Lott and on Lip Sync Battle UK – to transform their moves into a show-stopping routine to the song, one that’s sure to become the latest dance craze. Find out what Christina has to say about the competition, and what she’ll be judging it on here:

They’ll also be invited down to London where, alongside Christina, they’ll film the official video teaching Shopkins fans everywhere how to do their dance routine – and they’ll get to walk away with loads of Shopkins goodies.

Think you’ve got what it takes? Enter the competition at www.worldvacationdancecompetition.com, check out the Shopkins Facebook page or search #SPKWorldVacation for more information. The competition is open from 5pm on Friday 18thSeptember until 12am on Friday 22nd  September.

‘Anywhere In The World’ was created by song-writing duo, Jeannie Laurie and Gabriel Mann, who between them have worked with pop sensation Katy Perry and the multi-award winning Adele. Released today, the song is sure to delight Shopkins fans all over – indeed, anywhere in the world! Check out the song here:

SHOPKINS: WORLD VACATION will be available on digital download from 9th October and DVD 16th October. The DVD also comes with an exclusive Crispy or Crumbly Shopkin[1], the new Biscuit Bandit Shopkins that appear in the film.

The long-awaited Shopkins sequel sees fan favourite Kooky Cookie win the trip of a lifetime to London, but it’s not long before plans start going awry… setting the scene for a round the world adventure as Kooky becomes a fashion icon – and an unwitting owner of the Crown Jewels. And with the mischievous Biscuit Bandits on the loose, can the Shopkins and their best friends, the Shoppies, save the day?