Hold on to your broomsticks as the most magical book of Christmas 2013 is coming your way. The Befana Drama by Gianna Hartwright certainly deserves this title, thanks to a plot combining witchy spells with the magic that surrounds Christmas and which transports children aged 8+ into the charmed world of VIPBs – Very Important Present Bringers.

The story sees Italy’s Befana proudly making plans for her present drops and beloved festival when she discovers that HER POSTBOX IS BEING SEALED UP AND HER FESTIVAL DOWNSIZED!!! When she hears that Santa (to whom she once got engaged at a VIPB conference) is taking over and is now married to Mrs Claus, she flies into a rage that sends candy balls bouncing down the street!

What follows is a global adventure by broomstick, as she flies around the world (following a rejuvenation with Old Father Time and a re-naming as ‘Bef’) eliciting the help of friends and facing foe.

Will Bef succeed in her mission to save her present bringing patch and festival and get the better of The Most Fearsome Feller in Folklore, the very vain Capriccia Claus in her Casa of Contentments and the extremely sly 81st elf?  Only the lucky young reader will find out!

COMPLETE OUR BEFANA DRAMA WORDSQUARE BELOW! 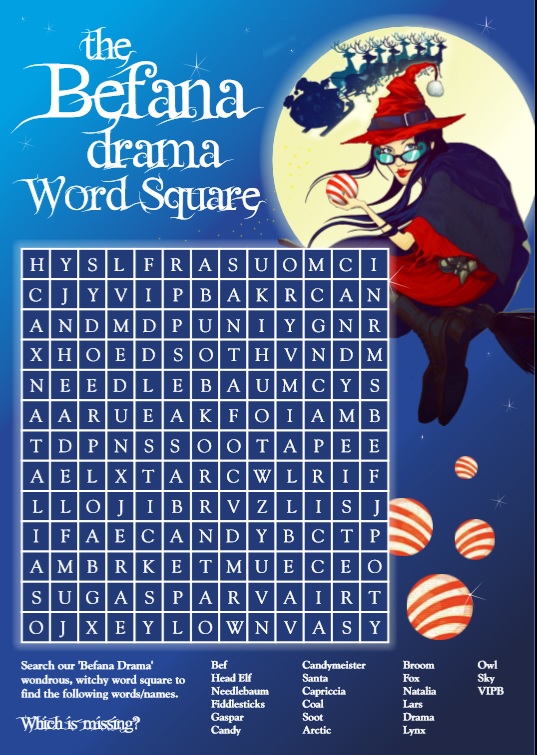