Reviewed by Claire Paye for What To Do With The Kids

My daughter, Amelia, age 6, is a huge fan of Moshi Monsters and this Character Encyclopedia made her eyes light up.  Not that either of us fully understands what everything in Moshi land means, although Amelia knows much more than I do, having devoted many non-school hours to pouring over anything Moshi-related. 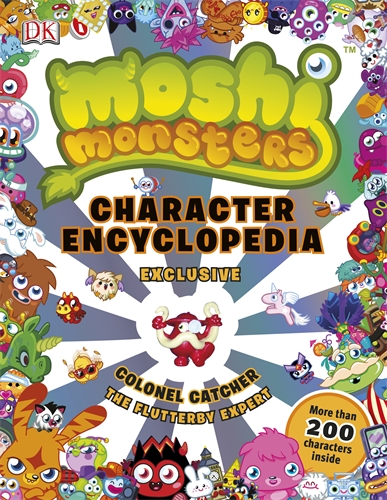 The Encyclopedia dedicates a full colour page each to over 200 characters.  The (girlie) favourites are here, such as Poppet and Luvli, along with the Editor-in-Chief of the Moshi Monster website, Roary Scrawl.  There are also some lesser known characters, such as the delightfully named Frau Now Brownkau, who is a C.L.O.N.C. agent (meaning a baddy, keep up).  However, not all characters are included.  My favourite, Dustbin Bieber is a notable exception.

I am constantly amazed by the amount of detail available about each Moshi Monster.  It's a treat to see my daughter, who sometimes balks at reading school books, pouring over descriptions of Moshi characters : I've found out that not all are Moshi Monsters, but I'm not entirely sure of the distinction between, for example, a Moshi Monster and a Glump.

The Encyclopedia provides a wealth of information on each character featured, written in a light-hearted and amusing style.  We learn, for example, that Peppy is a stunt penguin and 'is obsessed by anything with two wheels.  Sadly, [he] is useless at riding bikes because [his] feet can't reach the pedals!'  His Moshling type is Birdies.  His Species is a Stunt Penguin and he lives in Frosty Pop Glacier, which I think may relate to the online game, but as we aren't members yet, we can't see that part of the map.

The vocabulary used is quite advanced.  Apparently 'Sprightly Stunt Penguins like Peppy need to keep their energy levels up by guzzling engine oil and munching on fish'.  The fact that she doesn't quite understand all the words doesn't seem to dent Amelia's insatiable appetite for anything Moshi.  She loves the wealth of information in this Encyclopedia.

The book comes with an exclusive character : ours was Colonel Catcher, The Flutterby Expert.  It is definitely an addition to any existing Moshi books.  It is produced by DK and looks bright, colourful and attractive.

Any Moshi Monster fans would be delighted to receive one.  Amelia certainly was.

You can buy the Moshi Encyclopedia from Amazon