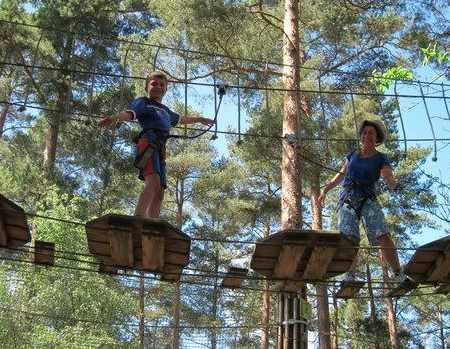 What’s not to like about making your way across a swinging rope bridge several metres above the ground?  Quite a bit, it seems, judging by the number of children whose daddies were coaxing, coaching and coercing their children across the Go Ape course while queues lengthened behind them.  Or by the number of girlfriends looking daggers at their partners from one narrow platform on a tree across a decidedly narrow beam to the next platform where their more adventurous other halves were standing.  There were certainly a number of participants earning themselves a fantastic sense of achievement for completing the Go Ape course. 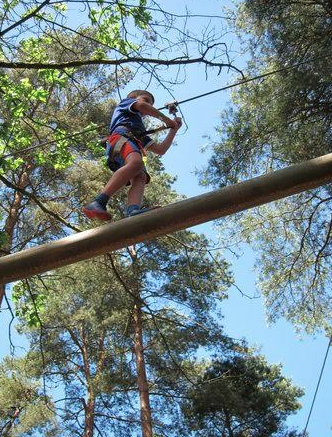 Amelia and Andy completed the Go Ape Tree Top Adventure, which is for age 10+ and 140cm+.  They both loved it, with Amelia immediately asking when she could go again.  Amelia is quite sporty and very agile but it was still a challenge for her, as it was for Andy.  It was physically quite demanding, especially on the arms.  Parents need to take their children’s abilities into account when they are in the younger age range to decide whether it is suitable.  It took them about 2 ½ hours to complete, including the lengthy, and necessary, safety briefing and training in the use of carabiners and zip wires (which complete each of the 5 sections) at the beginning.  They loved testing themselves and thoroughly enjoyed the whole experience.  They were free to complete the five sections in any order and in any length of time, but they could only do each section once.  Apart from the first two sections, they were on their own without any instructors to help, which is one reason there is an age and height restriction. 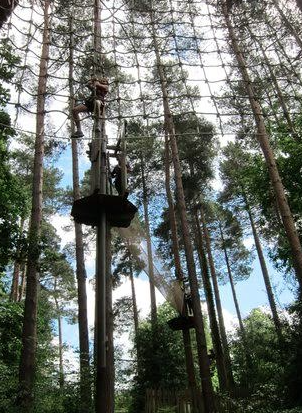 Charlie and I did the Tree Top Junior for which you have to be 6-12 years old and over 1 metre.  Charlie being eight and 135cm actually found it a bit too easy and was slightly disappointed.  There were several younger children who didn’t find it at all easy and were petrified.  But they managed to get round and clearly felt a huge sense of achievement at the end, matched only by the relief on their parent’s face.  One boy really struggled on the swinging bridge so an instructor came up and talked him through it.  There were also some adults completing the route without children who seemed to find it challenging enough.  It is also possible to be an accompanying adult and watch your child from the ground. 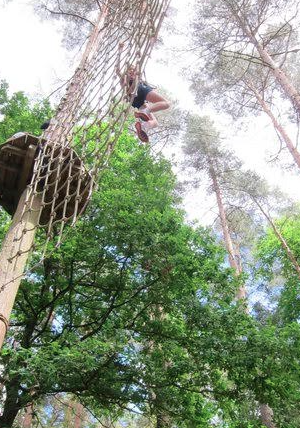 The drawbacks were fairly unavoidable.  Some of the more nervous children for whom each step was a major challenge ended up with quite a tailback behind them.  However, we could go round as many times as we wanted within the hour, and there were two routes so we were able to go more quickly on other occasions.  That said, it was still fun to swing around in the treetops on the different challenges while we were waiting.

Judging by Charlie’s experience, Go Ape Junior may not challenge the older children who are still too young to do Go Ape Tree Top Adventure.  However, it has whetted his appetite for his tenth birthday when he finally qualifies to do the older course.  For those six year olds finally able to do Tree Top Junior for the first time (one pre-schooler was dragged past kicking and screaming because it looked so much fun and he wasn’t allowed on it), I’d suggest they be careful what they wish for.  When they find themselves swinging around trying to reach the next step high above the ground, they may wish they’d gone swimming instead.  But the sense of achievement when they finish will make it all worth it. 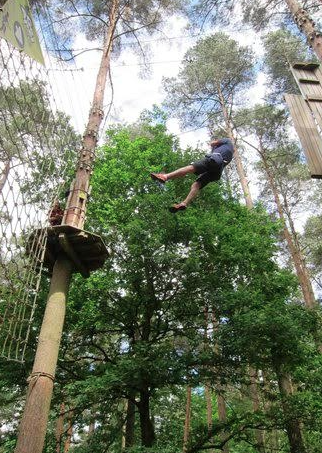 Go Ape Tree Top Junior has opened at Alexandra Palace, with the Tree Top Adventure opening late in the summer.