Hyde Park’s Winter Wonderland is a world of fun and entertainment which has got our family Christmas off to a memorable and, frankly, hard to live up to, fabulous start.  It may well be all downhill from here. 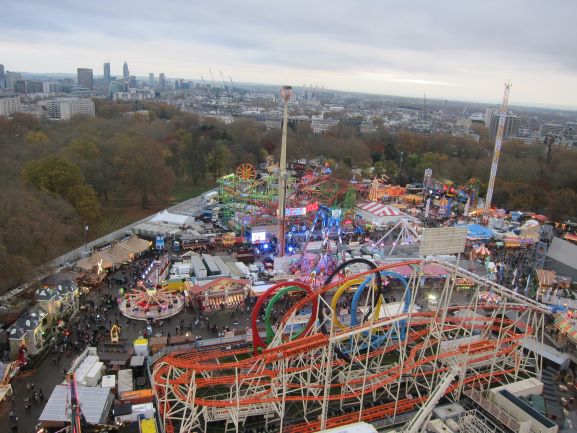 Winter Wonderland is a large festive space filled with rides which rival the main theme parks, shows such as Zippo’s Circus and Paddington on Ice, an outdoor Ice Rink and a Magical Ice Kingdom, filled with amazing ice sculptures, with a temperature to match.

There is loads to do for all ages, it is certainly a full day out.  The largest rides have a 140cm minimum height.  Charlie has been looking forwards to going on the Blizzard since our last visit a few years ago, when he was too small, and it lived up to his expectations.  For toddlers there are much gentler rides, with much cheaper price tags to match.  Toddlers even have their own special show in the Circus Megadome, which this year is the Mr. Men & Little Miss Show.  If your toddler loves Mr Bump, Mr Tall, Little Miss Chatterbox and the crew, this is a gentle show which will give you some much needed time to relax/nod off, and should delight fans of the Mr. Men and Little Miss books.  The joy is in seeing the characters brought to life as puppets as they each feature in a story, culminating in the appearance of Little Miss Christmas. 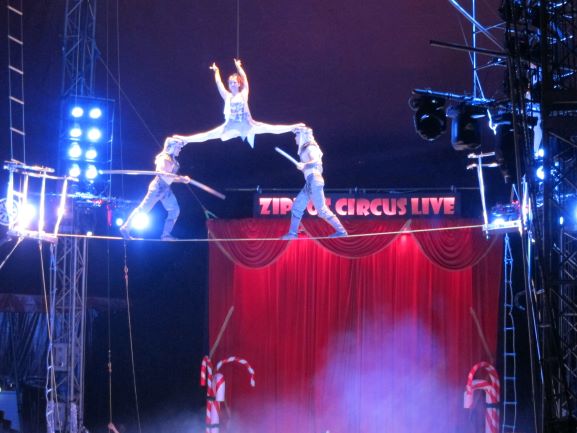 We were enthralled by Zippos Circus.  It was like watching a live, intimate performance of Britain’s Got Talent, but without missing the action to focus on the judge’s faces every few seconds.  The acts are thrilling, featuring amazing stunts, including a man riding a unicycle across a high wire with his wife en pointe on his head, and a Guinness World Record -holding juggler  One of our favourites, though, was the clown’s involvement of audience members in his part of the show.  That phrase would make me run a mile if I hadn’t seen it but it was brilliantly done and genuinely hysterical.  We would have liked to stay for Cirque Beserk but that was in the evening and we had arrived early to beat the crowds.

And crowds there were, but we hardly had to queue for anything, which is one of the advantages of the pricey rides.  The rides Amelia and Charlie chose, including the most incredible double bungee seat which catapulted them high into the air, much to the amusement of the passers-by, were usually 9 tokens each, which would be £9 each (it’s quite hard to find that information online).  It is well worth looking into buying a family bundle to include the Giant Wheel, which gives a fantastic view over London, a show or ice skating, the Ice Kingdom and some rides. 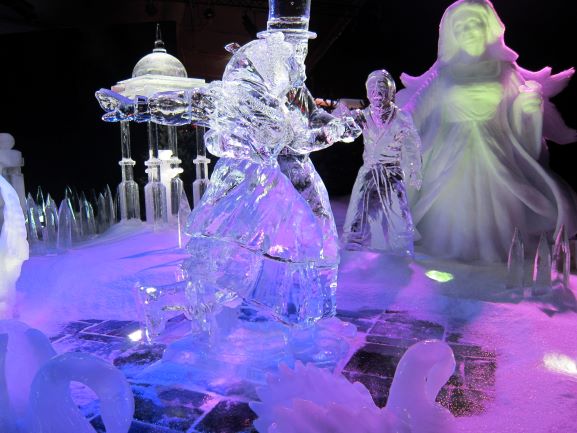 The Magic Ice Kingdom was stunning.  It is a Charles Dickens Christmas Carol-themed walk through story, featuring the most amazing ghosts of Christmas Past, Present and Future.  It is chilled to -10 degrees, which is an experience in itself.  I had never seen anything like it. The attention to detail on the sculptures was amazing.

In addition there are masses of food stalls selling a whole range of food, lots of bars (looked at longingly but futilely by myself as we scurried past from one ride to the next) and, importantly, several toilet blocks with nappy changing facilities around the site.  We had to empty our water bottles on arrival but could fill them up for free once inside.  There are also several stalls selling Christmas gift items. The ‘floor’ is easy for pushchairs or wheelchairs as the grass of Hyde Park is covered in plastic slabs (not sure what their technical name is).

Marble Arch and Hyde Park Corner are the best Tube stops.  We followed the suggested directions back to Green Park, and had a lovely walk up Park Lane, but it did take about 20 minutes.

A day at Winter Wonderland is not cheap, but it provides a wonderful, memorable experience, which the (non-paying) children will want to return to year after year.  But it is not just for the kids by any stretch.  It really is a unique day out that the parents can enjoy as much as the children.