A day out at Nottingham Castle

While on a short break in Sherwood forest we decided to take a day out to Nottingham Castle. It was a fairly easy journey to make form our cabin in the woods and was reasonably easy to find and park. The Castle and the surrounding areas are run by Nottingham Castle although at time of writing this review we were told that a trust was taking over the running of the Castle supported by the National Lottery heritage fund. 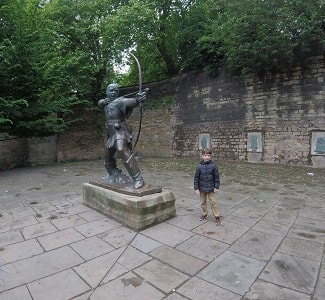 The Castle itself was not what we were expecting, it is not so much a castle but more of a 17th century stately home. The original castle was blown up after the end of the English Civil War so to call it a castle is somewhat misleading. This attraction would suit people who enjoy walking and stately homes. Although again this is a little dissapointing since any period furniture and decorations from the home have been destroyed by fire long ago. Don't expect to see much in the way of period decor!

The entrance price for the 3 of us was £20 (cost of a family ticket), whcih given the non castle nature and the lack of anything really exciting from the period felt a bit of a rip off. Not sure there was enough here for the price and the tunnel tours are not included in the cost of the ticket. The tours are priced at an additional £5 per person.

The most enjoyable part of Nottingham Castle was the tour, it took about 40 minutes down through the caverns beneath the castle. The tour guide was knowledgeable about the castle and local history, however with such a large tour group (approx 35 people) her commentary was lost at times.

Overall I would rate this attraction mediocre with little interest for people who are looking for authentic castles or even period stately homes. The cavern tours and the Mercian Regiment museum are the only real highlites.