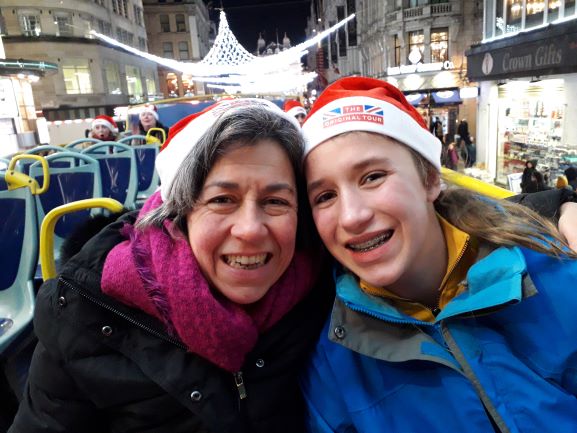 Never has an evening spent in London rush hour traffic been so enjoyable!  Our Christmas lights 90 minute tour featured a leisurely (by necessity) drive around central London, from Leicester Square down past Parliament, out past Harrods to Chelsea then back past Hyde Park (where Winter Wonderland was visibly in full swing), along Oxford Street (very briefly due to roadworks) and finally down the magnificent Regent Street.

Having lived in London for several years, I’m familiar with the route, but seeing it on the open top of a double decker bus revealed all sorts of secrets that I hadn’t been aware for, such as the smell of the horses in the barracks by Hyde Park.  We saw thousands of lights, largely all on Harrods, and were able to develop our own top ten of Christmas trees, from the massive one in Trafalgar Square, given to us by the Norwegians each year, to the Downing Street tree, to trees filling the whole window on the upper floor of apartment blocks.

For anyone new to London, it must be thrilling to see all the famous places you’ve heard of pass before your eyes – Downing Street, Park Lane, Trafalgar Square, Westminster Abbey and many more.  The tour is an excellent way for everyone of seeing how the various parts of London are linked, which isn’t obvious from the Tube map.

Our Original Tour guide was superb.  He was full of interesting facts about London which, at this time of year, highlight what an impact Prince Albert had on our Christmas traditions.  He had an excellent, chatty manner and gauged the mix of tourists and locals on the bus so that he could tailor his talk to each of us.  Given the largely historical nature of the sights of London, it might have become a bit boring for the children on the bus, but Amelia and Charlie found it all very interesting and, when they tuned out, could just look at the lights and the buildings instead.  One highlight for Amelia (not to mention the rest of us) was the suspended rhino, dressed for the season in a santa outfit, outside the second floor of a shop, which I’d never known was there. 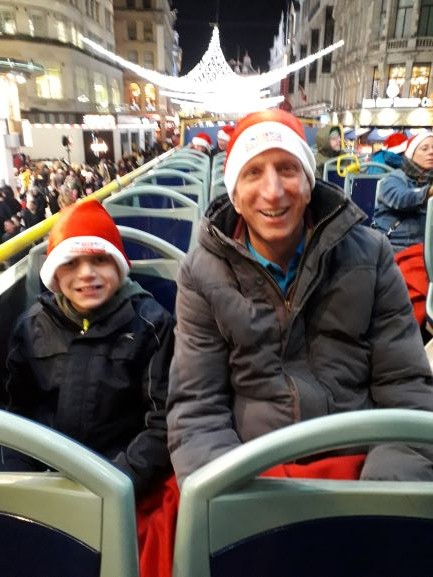 We had a few minor quibbles.  The Planet Hollywood free drink they mention is about a 5 minute walk away from the start so we didn’t have time to collect it before and had to rush off afterwards.  Not being able to drive down Oxford Street meant we couldn’t go past the wonderful Christmas windows of John Lewis and House of Fraser (which might not even be there by Christmas 2019).  It is such an integral part of any Christmas lights visit to London that I think it should be made clear that although you do see the Oxford Street lights, it is only for a brief moment before you drive off down a decidedly unexciting adjacent road.

With those quibbles out of the way, I’d recommend the Original Tour to anyone wanting to show central London to their children (probably over the age of six), in a stress-free and unique manner.  They warn you to dress up warm and we’re glad we did.  We appreciated the free blanket (which we had to return) and the santa hat (which we didn’t).  We were lucky with the weather, but there are some covered seats at the front of the bus if the weather is bad.

The Original Tour was a brilliant way to see London in full Christmas mode.  Even Oxford Street looked quite civilised from the top of the bus and being in traffic just gave us more time to enjoy the fantastic architecture and lights around us.   It was a relaxing and fun way to spend an evening out as a family in London.

Find out more about The Original London Sightseeing Tour
@parent