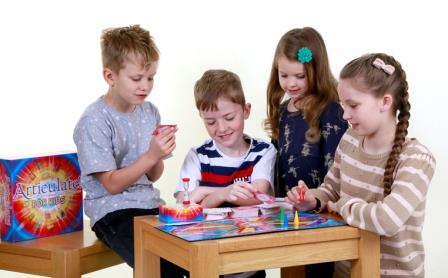 By Claire and Amelia (age 8) Paye

Our greatest enjoyment in playing Articulate for Kids derived from watching Amelia’s aunt trying to explain who Richard Branson was to the uncomprehending Amelia, and trying to stop her uncle from shouting out the answers to all of the clues, regardless of whether they were coming from his team or not.  Articulate for Kids is an extremely well thought out version of the ever popular Articulate.  They are both games in which contestants have to describe the words on the card to their team members, without mentioning any part of the word or saying ‘rhymes with’ or ‘sounds like’, before the timer runs out.  (We found that the timer was too short so we turned it over twice for each go.)  Players move round the board according to the number of cards they guessed correctly.

The categories include Person – ranging from Maid Marian to Dermot O’Leary, World, Action – have fun acting or explaining ‘doing’, Object, Nature and Random.  The words are fairly timeless (although how would you describe ‘tweeting’?) and are generally very age appropriate.  The game is supposed to be for 6 to 12 year olds, which is accurate.  My 5 year old would struggle to read the words, let alone describe them.  Amelia at 8 was a good age and really enjoyed the game, although one of us needed to act as a consultant to her team members to let them know which cards to pass on as she wouldn’t know the answer even if the word was described perfectly.

Articulate for Kids is obviously a fantastic game for building up literacy and language skills in children and adults, as adults make the effort to describe words in terms children would understand– an adult might give the clue, ‘By the rivers of…’ for Babylon, but this won’t necessarily work with your average 6 year old.  Where you have all adult teams, if you have both games, the adults could play with the adult cards on the Articulate for Kids board to make it fairer.

This is a multi-tasking game.  It makes a great travel game.  You could just take the cards with you and work out who has guessed the most correctly.  Or you could use the cards as a base for Pictionary, where you have to draw the words and the other team has to guess from the drawing what the word is.  Or charades, where you have to act out the words.

This is one of those games which can involve the whole family and is as much fun for the adults as for the children.  Definitely one for the Christmas list. 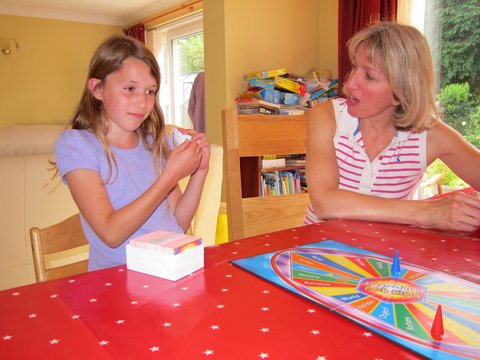