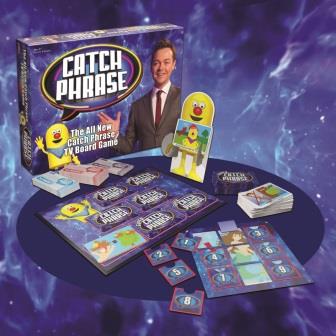 We played Catchphrase with John (10), Louise (8), parents (age unspecified) and visitor Catherine (24).  Catherine loves Catchphrase on the telly, although none of the rest of us had seen it.  I guess if you'd seen it you could have added the right voices or jingles for atmosphere.

The cartoons were fun and clear.  The rules were clearly explained.  The device of answering a question in order to qualify to answer a harder one (where different parts of a big picture were gradually uncovered) made it more interesting.  And everyone liked winning hundreds of pounds when they got a question right.

Louise was at the edge of her comfort zone.  At 8 she doesn't know about phrases like "red herring", "back seat driver", "fly on the wall" and many others ... so it was very educational for her, and quite fun for us explaining them to her.  But it only worked that way because she was the young one - if there were lots of 8 year olds I wouldn't choose to play this game.  The game designers have taken this into account by including cards for "Ben 10", "Little Mermaid" or "Iron Man" etc.  Personally I don't particularly like the way this reinforces the ubiquitous branding of toys for sale (rant rant), but that's not a mainstream view.

John has been doing preparation for the 11+, and in that we have come across a number of questions that look for understanding of these sorts of phrases.  So good for that!!

We like playing board games as a family, and we found that one round, which took us about 45 minutes, was great.  Our main concern was that once we had answered all the questions it would become a bit samey, so it's a bit of a "one hit wonder".  Maybe they will issue subsidiary question packs, as the makers of Trivial Pursuit do?

Catherine really enjoyed it, and it was a good way of getting to know each other better as when we described what the phrases meant to Louise we'd draw examples from our own backgrounds which are slightly different.

For stockists, and play games on the website, please visit www.drumondpark.com