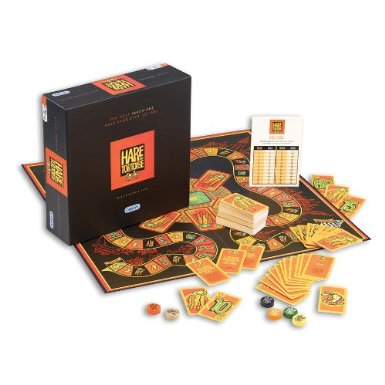 Hare & Tortoise is a board game of skill for all the family. Over 2 million copies sold, and Hare & Tortoise is a former 'Game of the Year' in Germany. Ages 8+. We invited What To Do With The Kids readers Edwin and Sally to review the game with their mum. This is what they had to say:

Hare and Tortoise - reviewed by Edwin (age 10) and Sally (age 8) with their mum.

Don't be fooled by this game; it looks simple but it's got hidden strategic depths.

The principle is that you can go haring ahead at the beginning, but then you'll have spent all your carrots very quickly and for the rest of the course you have to dodge about picking up more carrots to keep going.  (A friend suggested it was more The Ant and the Grasshopper, on the Aesop theme.)

The first time it took us so long to fathom the rules that we couldn't begin before we had to go and do something else ...  The second time we set it up, 8 year old Sally advanced tortoise-like, very comfortably; Mum went for hare tactics and got sucked into a whirlpool of negative carrotness.  We got about ten squares in and again had to go and do something else...  The world needs to fear my 10 year old strategy nemesis Edward in this game; I think he will be compulsive with this one.

You can buy Hare and Tortoise Race Game on Amazon: