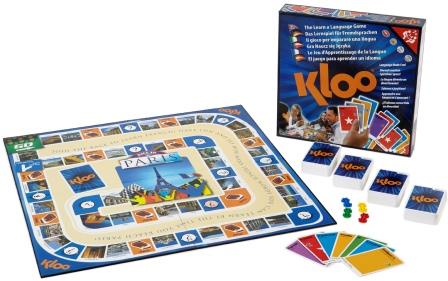 We were invited to review Kloo Race to Paris for What To Do With The Kids. We were especially interested in this game as Rachael has just started to learn French at School and Luke has just started studying for his GCSE. We thought this would be good practice for both of them, chance for my husband and I to see how well they’re doing, and also a rare opportunity for us to all sit down and play a game together. We often spend the evening in the same room, but watching our own individual TV/laptop/ipad screens, like a lot of families, I guess.

That said, we did begin by watching the online instruction video for the game on my ipad. It’s an animation video and reminded us a bit of the ones you see on planes about what to do in any emergency, but we all appreciated the convenience of a quick video tutorial rather than one person having to sit and read the instruction manual and then explain to everyone else.

Each player is dealt a set of cards. You have 4 decks to choose from – people, places, eating and drinking and everyday objects. You can play one deck at a time (good for beginners) or mix them up for more of a challenge. The aim of the game is for each player to score points by building sentences with their cards. Even if you are new at French, like my daughter, you can use colour coding on the cards and translations on cards which have already been put down into sentences to help you. You can get extra points if you can translate the sentence you have just made.

You can play the game either with or without a game board. We played with the game board, which we found much more interesting as you could travel through the cities in France which was fun. There are also challenge squares, which added some variety to the game. Playing without the board would be fine, but might start to feel a bit like a classroom exercise.

Because we played with the game board, we eventually had to relocate from the table to the floor. Our table is pretty big but you need a lot of space to be able to lay out all the sentence cards, and you need to be able to see the whole card so that players can use the translations on the bottom of each one.

This game is made for people with all abilities in French, including beginners. It’s not necessary to have someone who is proficient at French in the game, although it cuts down on argument time if disputes have otherwise to be settled through looking up translations. I would say it is actually better if the players are of a similar level, Luke thrashed Rachael in playing this game but they are at very different ability levels. Even so, Rachael learned some new nouns and verbs even just in playing one game of Kloo Race to Paris.

All in all I would say this is a really fun way to practice French, to learn some new vocabulary and to practice constructing sentences, especially for beginners.

Multi-award winning KLOO has turned learning a language into a game. Within a few seconds players can create grammatically correct sentences and learn new French words to win points and power racing cars in a Race to Paris. Special colour coded cards mean even absolute beginners quickly learn to speak the language making learning French fast, effortless and a lot of fun! Race to Paris comes complete with four decks which cover different topics such as “People”, “Places” and “Eating & Drinking”. For those looking to learn French and enjoy a Joyeux Noël, Race to Paris will have them talking French tout de suite!

Available at Foyles, www.amazon.co.uk  and www.kloogame.com