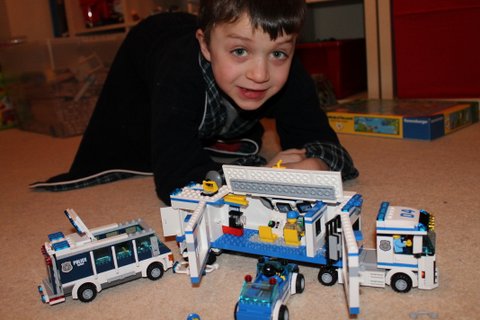 Review by Claire and Charlie (6) Paye

The Mobile Police Unit has become an essential feature of Charlie’s ever-increasing LEGO City police unit action chases.  This is both a good and a bad thing.  The bad thing is that the surprisingly large number of Lego robbers in our collection apparently require drastic measures to keep them restrained, which means that the Mobile Police Unit is often at the centre of pile up and at one point had to be taken off the road and completely rebuilt by Charlie’s parents.  The good thing is that this unit has given a new lease of life to other Lego City police vehicles in our possession and Charlie is loving his role of guardian of the peace, with some robbers having to be deported via the Lego City Cargo plane.

The Mobile Police Unit was a much requested and anticipated Christmas gift.  It is extremely intricate, but Charlie managed to assemble it himself during one intensely-focussed afternoon (followed by much charging round and letting off of steam).  Unfortunately, there is apparently no excitement in assembling it a second time, particularly not when compared with the joy of crashing it.  I expect there are forums dedicated to parental philosophies re Lego, from the ‘you destroyed it, you put it back together’ approach to the ‘I actually find assembling Lego rather cathartic, as I can see what I’ve achieved, which can’t always be said for time spent on the computer, and if I don’t put the Lego item back together, it may not be played with for quite a while, but if I do, I’ve bought myself another hour of peace at a later date.’  You can probably guess which camp I’m in.

The main drawback of this Mobile Police Unit is that the hook attaching the cab to the trailer doesn’t work very well, which means that the trailer comes off a bit too easily.  However, there is masses to do with any disconnected trailers, including monitoring the screens for illicit activity, locking crooks away in the mobile jail and getting road barriers out of their storage area.  My favourite detail is the slide-out city map.

We are huge fans of Lego.  The LEGO Juniors range is inspired, and enabled Charlie to realise that he can actually assemble Lego himself.  He is currently working on the Lego Heroes Spider-Man Spider-Cycle Chase all by himself (apart from a brief post-bedtime re-location of a few bits by his mother).  He is focussed, following instructions, developing great spatial awareness in terms of which way round things go and which location they are in, and is developing brilliant dexterity in managing all the little fiddly bits.  Lego instructions are very clearly portrayed and easy to follow.  The suggested age ranges on the front are fairly accurate.  For example, Charlie struggled with the Lego Star Wars Jedi Interceptor, which is labelled 7-12.  Yes, it has just been Christmas/birthday and yes, we do have lots of Lego now, but it is such good quality and provides so many hours of fun, for re-assembling parents as well, that the many Lego presents from relatives/friends are all appreciated and being very well used. 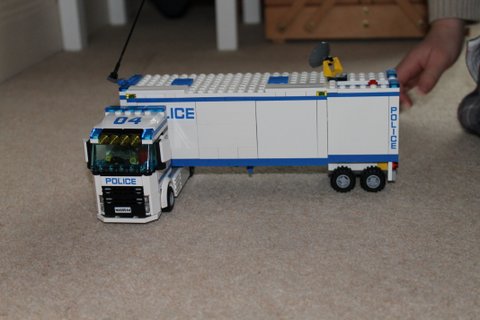