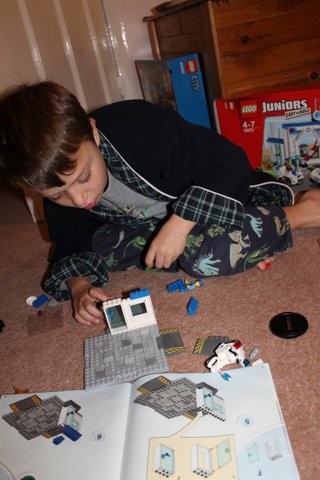 By Claire and Charlie (6) Paye

The LEGO Juniors range is ever-expanding and this latest addition is very welcome in a house which actually already has as many cops and robbers as you would have thought a little boy could want.  One of the great features of this set is that the police motorbike can drive THROUGH the police yard, under the movable barrier, which is very exciting!  There is great attention to detail with a slightly random police dog, a bin whose sole purpose seems to be to come off and be one of those pieces of LEGO that you can’t quite place which set it has come from, CCTV and an aerial.  The handcuffs, walkie talkie and police cell are at the ready to catch the pesky robber with his wads of 100s.

LEGO Juniors is brilliant for younger children who find Duplo too easy and normal LEGO too hard.  The official age range is 4-7.  The set comes in three distinct bags, which each build a stand-alone part of the whole.  The difference from LEGO for older children is that it takes fewer pieces to make a whole item, such as the police car or police cell.  Each page features only one or two pieces of LEGO to add.  Anyone who has tried different imitations of LEGO will appreciate how clear and well-presented the full colour in LEGO instruction manuals are. 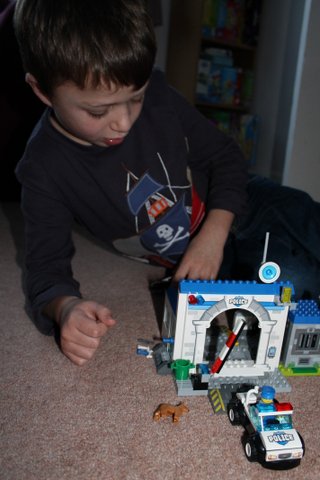 If you’re embarking on a life of LEGO, I have some top tips for you, learnt through bitter experience.  As I looked through our box of random bits of LEGO the other day, I wished I’d kept the spare pieces separate.  Each set comes with some spare little pieces to replace those which are hoovered up or disappear down into the nether regions of the sofa, never to return.  These are joined, in our box, by pieces which do belong on something if only we could remember what.  When we come to remake the LEGO in order to make sure we’ve got all the pieces, before taking it apart to store it and make again in the future, we then find that there is always a piece missing, which isn’t one of the hundreds in the spares box.  It’s a mystery.

I’d also suggest that it’s worth keeping an occasional eye on the construction of the LEGO Juniors Police set as, if you’re anything like me, you’re the one who will be putting it back together after a particularly harrowing escape.

Our existing LEGO policemen have accepted the arrival of the LEGO Juniors police with equanimity possibly because the robber looks suspiciously similar to our existing robbers, so they must have worked out they’re fighting a common criminal.  The difference with this set is that Charlie managed to put it together all by himself, with just the occasional rejigging by me, when things ended up on the wrong side.  There are plenty of scenarios for him to play out, particularly now that we have the LEGO cargo plane.  The robber has found himself being deported more than once.

This is an excellent toy to put on the relatives’ Christmas lists for your children. 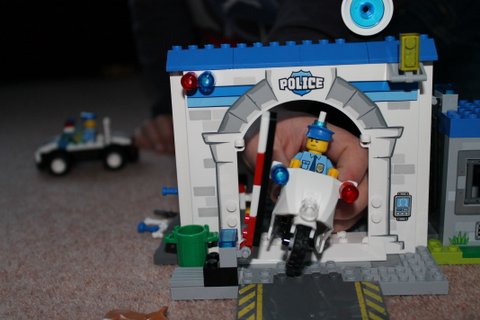