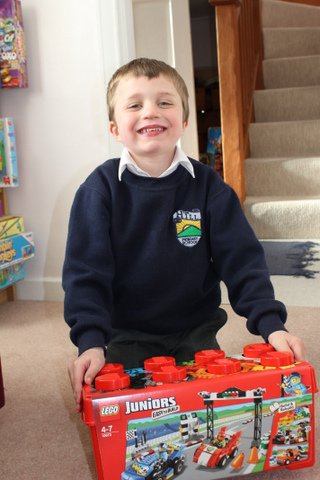 The newly launched LEGO Juniors range is almost perfect for Charlie – age 5 and more inclined to investigate how LEGO comes apart rather than put it together.  Simpler, with slightly larger pieces than the original LEGO, more interesting than Duplo, LEGO Juniors is tailor-made for Charlie’s age range – they state 4-7.

The kit came in a giant LEGO brick which will fit many more pieces – handy as our LEGO always seems to multiply until we’re left with lots of random pieces.  Assembling the two cars was the first time Charlie had managed LEGO sets on his own. Charlie found the instructions are clear and simple to follow (you don’t fully appreciate the quality of LEGO instructions until you try cheaper versions).  Being a boy, Charlie loved making racing cars.  The pieces were in self-contained bags and, for the more impatient consumer, a basic version of the cars can be assembled within a 4 year old’s attention span.

The only drawback is a symptom of the kit’s success.  It is marketed as ‘Build & Rebuild’.  However, Charlie was so proud of what he had achieved that the idea of disassembling it so soon was anathema to him.  This is ironic given how keen he has always been to test the durability of the LEGO City items which other family members have put together.  Now that he knows how to fix a car with a detached bumper, having made it himself, he is treating the cars with much more respect.

As a result, he hasn’t made the second version of the cars with the kit supplied.  This problem would be solved with 4 chassis instead of 2.  However, over time he may be able to bring himself to take the cars apart.  For now, he is showing unusual restraint and the cars are still in one piece.

I’m delighted that LEGO Juniors has been launched.  It definitely bridges the gap between Duplo and LEGO and we’ll be looking out for more sets for forthcoming birthdays/Christmas.

LEGO Juniors are available to buy in most good toy shops and on Amazon.