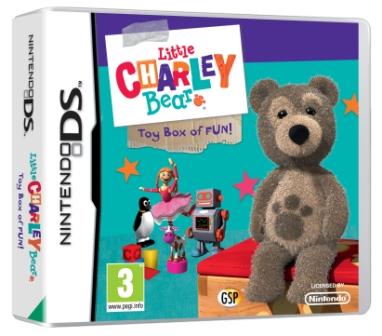 Avanquest has just released a brand new Little Charley Bear game for the Nintendo DS‚Ñ¢. The game follows Little Charley Bear and his Toybox friends as they go on exciting adventures and discover new things about the wonderful world around them. Games and activities include: Race Car Champion Charley, Where is Charley Bear?, Charley Flies a Kite, Charley Goes to Space and many more!

· 15 exciting games and activities
· 3 levels: Easy, Medium and Hard to suit all ages
· Games to encourage the development of memory, logic, creative and problem solving skills

What To Do With The Kids were invited to review the game, so we asked two of our top reviewers, Sophie McLaughlin aged 7, with step-mum Jenna, to try the game out and give us their verdict.

Here is what Sophie had to say:

The characters in the game are Charley Bear and his toys, like in the TV programme. There are different activities in the game with Charley Bear in his toybox, puzzles, counting, matching lots of things really. It was fun to play. Some bits were quite hard like flying the kite and dodging the birds. I thought it was just right for 3 year olds but a bit too easy for me apart from the flying the kite game - that's a bit hard. I managed to finish the game and got high scores. My favourite game was Charley's fun jigsaw. I didn't like Charley Plays Music as much because you just have to copy things and I got bored.

The game is well priced at £20.41, and I thought it was pitched at the right level for kids aged around 3. My son who has only just turned 2 was playing on it and he was getting high scores! His favourite game was Hide and Seek Charley Bear. One criticism is that I thought the graphics on the game weren't as good as the Charley Bear app, especially on the jigsaw game. The app has a magnetic technique which lets the pieces click into place when you are near to the correct position and the graphics are clearer.

Overall this is a good, educational game - great for younger kids like my son, but maybe could get boring after a while for older kids like Sophie who is 7. I would recommend it to other families.