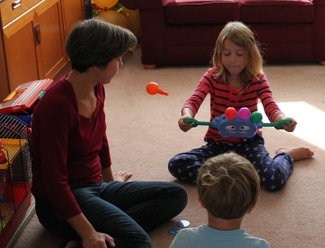 Within seconds of opening the box (and finding batteries and a screwdriver), Amelia was pumping away on Pumpazing. It really is that easy to set up. The idea of the game is to pump the arms in and out until a head flies off the top.

As it flies (and it really does, remove all fragile heirlooms from the room or play in a vacuum) off, the little character makes a boing sound. If it says 'uh oh', you lose a card. It's a very simple game to play and proved a great hit with Amelia and Charlie. It's great to find a game that requires no skill, just luck, to play with pre-schoolers. Although the box states 4+, Charlie had no problems playing it so it would probably be fine from 3+ or even younger.

This game could actually be played by a pre-schooler on their own but they may struggle with the reset button for reloading the heads so you may need to be on hand to help with that.We were all kept amused for a good twenty minutes during our first game. We actually gave up before the end as the character is very forgiving and hardly ever says 'uh oh'. You can play a sudden death version (you may prefer to call it something else to reassure little ones) whereby you're out as soon as there is an 'uh oh'.

Pumpazing is quite a physical game so it's ideal for rainy days. The excitement and uncertainty over when the head would fly off turned Charlie quite hyper so that he resembled a whizzing head himself. It is an attractive-looking game with bright colours.

In summary, it's a fun, easy and stimulating game. It is ideal for pre schoolers as it is so simple, but it can be played by any age. Amelia's comment was that 'it's shocking when it pops out'. It's a game to be played with the eyes half-closed and the nerves primed!

Pumpazing is on sale now