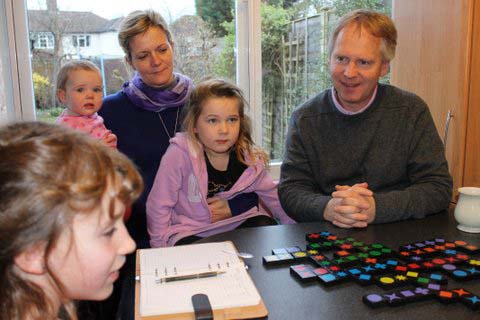 Everyone I know who has played this has loved it and gone on to buy it for their family.  It can be played by two or more players from age about 6 up, exercises the brain cells a bit and lasts about 30 minutes, so it isn't too long and it takes no set up time.

The idea is a blend of Dominoes and Scrabble.  Each player takes 6 tiles from the bag.  They then take it in turns to lay their tiles, matching either colours or shapes.  You score one point per tile in each completed line, so a tile can count twice if it is part of, say, a squares line and a purples line.  If you complete a line of 6, you score 12.  Each turn varies depending on what the previous player has put down.  You pick up the balance of tiles from the bag to start your next go with 6 again.

There is room for strategy as you could opt not to set up a Qwirkle by laying 5 tiles, or by closing off a Qwirkle by laying tiles so they block the completion of the row, but we're still just at the innocent stage of trying to score as many points as we can.

My top tip would be to suggest that on the last go you divide the remaining tiles evenly amongst the players or else whoever picks up the last tiles has an unfair advantage as they may have the extra go.

Younger children can join in with adults, although Amelia (6) was helping out her grandfather, which is the reverse scenario.

The game is so much fun that Andy and I spent a cheeky evening playing it by ourselves when the children had gone to bed because we're just wild like that.  It would be a great game to take on holiday because although the tiles are a little heavy, they would squash into a bag nicely.  All you then need is a notebook and pen for the scores.