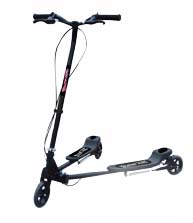 The new Vtriker Elite is the latest model from the range of uniquely-designed Vtriker scooters.
Unlike conventional push-along scooters, the Vtriker has two foot platforms that the user pushes in and out, scissor-style, to propel the scooter forward. The Vtriker is completely pedal-free and battery-free.

The first generation Vtriker began a new craze when it was launched, and so we were delighted to be given the opportunity to review the new Elite.

We asked Luke, aged 10, to test drive the Vtriker Elite for us. This is what he had to say:

The Vtriker Elite came in three pieces but it was easy to put together - I helped my dad put it together.

It's different to drive than a normal scooter but it was quick to get the hang of it.

It's much bigger and heavier than a normal scooter, it weighs about the same as a small bike, but it's good once you get used to it. You definitely get more exercise on the Vtriker than on a scooter. It's hard work going uphill.

It goes much faster than a normal scooter, especially when you go downhill, and it moves much more smoothly. You can do different styles - like scissors or slalom. You can even go forward whilst almost facing sideways because the back wheels can move around on their own unlike a normal scooter.

The downside to the Vtriker is that you can't do tricks with it like a normal scooter because of the brake wires - you can't spin the scooter. But I think I could learn some tricks with the Vtriker after spending more time using it.

It would be brilliant to use in a proper skate or bike track because it goes so fast. I would recommend the Vtriker Elite to my friends if they wanted to get a scooter which goes really fast.

See Luke try out the Vtriker:

Overall we thought the Vtriker Elite was a really exciting scooter which is great exercise for kids (and adults - we had a go too!). It is robust and well put together, and we liked the fact that it has brakes. Ideally the Vtriker would fold down (it doesn't) but even so it will fit in an average size ar boot.  This is definitely a great Christmas gift for kids aged 7+.

You can buy the Vtriker Elite on Amazon: