A Monster In Paris - Review

READ OUR WHAT TO DO WITH THE KIDS REVIEW 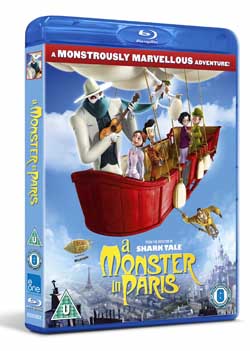 Be prepared to get acquainted with a tuneful talent of monstrous proportions this summer as Franc the musical flea wins hearts and minds in A Monster In Paris, arriving on Blu-ray Family Pack and DVD from June 4, 2012, courtesy of Entertainment One.

A wacky inventor, his camera-crazy best friend and a madcap monkey make a massive mistake when let loose in a mad scientist's laboratory. With lotions and potions spilling everywhere, the troublesome trio accidentally creates Franc, the product of a reaction between a common flea and one of the scientist's mystery concoctions. What they fail to realise, however, is that this 'monster' is actually a soft-centered soul with a spooky talent for music.

With the help of a feisty nightclub singer, Franc becomes the talk of the town, just as stories of Paris's newest monster attract the attention of the egotistical police commissioner, hell bent on securing a big prize to help his battle to become mayor. The unwitting scientists and the singer must team up to protect Franc, a monster with more than a musical career to protect!

Produced by the legendary Luc Besson (The Fifth Element, Arthur And The Invisibles) and from the director of the multi-million selling Shark Tale and The Road To El Dorado, A Monster In Paris features the voice talents of French singing sensation Vanessa Paradis, as well as Sean Lennon, Danny Huston (X-Men Origins: Wolverine, Wrath Of The Titans) and Adam Goldberg (TV's Joey, A Beautiful Mind). One of the most original, charming and fun-packed animated films of the year, A Monster In Paris also features beautiful, original animation and a vibrant story packed with memorable characters that the whole family will adore!

WHAT TO DO WITH THE KIDS REVIEW

Who is this film suitable for?  All the family/children under 10

Reviewed by: The What To Do With The Kids Team

This is a gorgeous little animation which will transport you to the streets of Paris. There are some definite visual references throughout the film to The Hunchback of Notre Dame and The Phantom of the Opera.

Although it is very much a light-hearted film, there are some important themes for young children about loyalty and not judging by appearances.  Little ones will love the sweet characters, simple plot and kids humour, and parents will enjoy the beautiful soundtrack, sung by Vanessa Paradis and Sean Lennon.

What the grown-ups say:

We particularly liked the way the animators captured the atmoshere of Paris - not easy to do. We also liked the unlikely heroes - it makes a nice change to see the nerdy guys win the day and get the girls!

What the kids say:

We loved Charles the singing money and we thought Francoeur was really nice and didn't deserve to be called a monster. We're not going to squash bugs in the garden ever again.