Read our What To Do With The Kids Review! 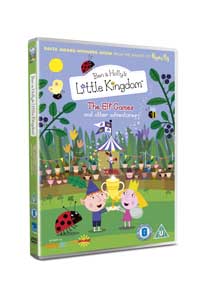 More magical capers from Princess Holly and her friend Ben Elf. Get your kids into the Olympics spirit with the release of the new Ben and Holly's Little Kingdom DVD, The Elf Games, out May 14th, £8.99 RRP from www.littlekingdomstore.co.uk.

WHAT TO DO WITH THE KIDS REVIEW

Reviewed by: Lisa Brown, with Caitlin age 8 and Edie age 2.5

What kind of DVD is it? Animation

Who is it suitable for? Aimed at under fives

What is the plot/themess? Various themes are covered throughout the DVD including sports, animals, and sharing.

What are the best bits? Holly shouts for Ben to win but instead of helping him Ben looses the race!

Who is your favourite character and why? We like Nanny Plum because she always thinks she is doing the best thing but makes it worse in a funny way. Edie also likes Holly just because she is a fairy and can fly!!

What the grown-ups say: I find Ben and Holly to be really educational for the kids. It's full of bright colours and has a great range of stories.

What the kids say: Ben and Holly's Little Kingdom is really fun and colourful. We love the stories and the characters.