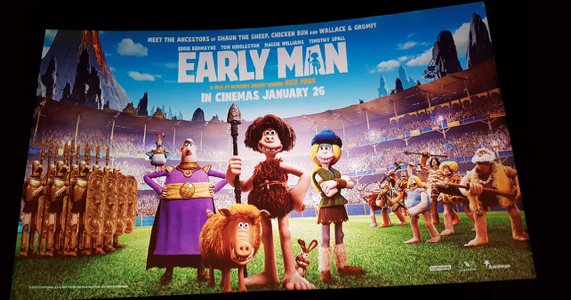 Before the film, we were treated to an impressive balloon maker and Kevin the magician, who mesmerized all of us by his astonishing magic! 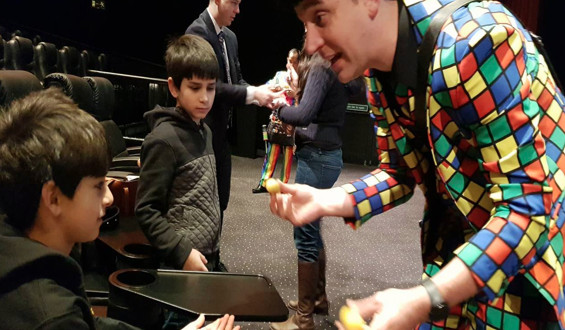 Early man is the latest creation from the makers of Wallace and Gromit, Aardman. The film took over 5 years to make and is voiced by mega stars, Tom Hiddleson (Lord Nooth) Eddie Redmayne (Dug) and Maisie Williams (Goona).

The film is about a motley crew of tribesmen living a stone age existence while the rest of the world has moved on to the bronze age. The main character is Dug (Eddie Redmayne) who hunts for rabbits with his trusty sidekick, a pig called Hobnob.

One day, the leader of the bronze age, the greedy and arrogant Lord Nooth (Tom Hiddleson with a hilarious French accent) forces Dug’s tribe to move to the Badlands, which is a wasteland.

In an attempt to get his land back, Dug challenges his opposors to a football match (the beloved, national past time)-despite having never played the game before.

What ensues is a comedy filled with laugh out loud moments, my favourite being Lord Nooth being massaged and serenaded by Hognob the pig! I also liked how one of the heroes of the story was Goona, the gifted female football player from the bronze age whose life-long dream is to play football (but the bronze age team is male only.)

Early man is a classic tale about the underdog and how sometimes how the team with the biggest heart and co-operation can overcome the biggest obstacles and be more powerful than the team with all the skills. The film has a contemporary feel because it’s a story about football and teamwork.

Watching Dug’s team train for the football match and the actual match itself was funny and nail biting! Kids of all age-and adults will enjoy this. I myself am not a football fan but my kids and I left with big smiles on our faces. Definitely one to watch. 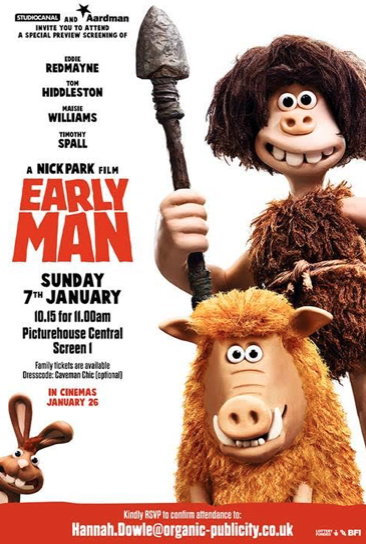