Flight of the Navigator - review

Flight of the Navigator

Reviewed by What To Do With The Kids 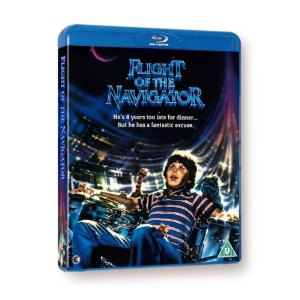 Flight of the Navigator is the action-packed classic 80s adventure into another world and makes its Blu-ray debut courtesy of Second Sight Films.

The year is 1978 and 12-year-old David Freeman is knocked unconscious while playing. He wakes up and discovers it's now 1986 and he's been missing for eight years. NASA believes he's been abducted by aliens and want to use him for their research. But with the guidance of a strange unseen entity he discovers a hidden spaceship and with the help of MAX the computer sets off on an incredible mission to get back to the past where he belongs.

This family sci-fi adventure comes to Blu-ray for the first time as well as a DVD release courtesy of Second Sight Films and makes a perfect gift for Christmas. Prepare for take off on an adventure of a lifetime with Flight of the Navigator.

Review by the What To Do With The Kids team

If your children are into sci-fi adventures, then is an all-time classic. For those parents who are slightly too young or too old to have enjoyed the film when it was first released, for kids of my generation (born in 1977/78) this was was a film every kid had to see. It was part of a raft of children's sci-fi movies coming out of the US in the mid 80s such as ET, which went on to be cult classics.

Whilst the look of the film is quite dated in parts, the story and the characters are still relevant today. We watched this with an 8 and 10 year old, and though they seemed to find the film a bit slow to get intoat first, they were soon totally engrossed.

One warning - some of the scenes are a little bit chilling and nervous children might be a bit scared, but overall this is not a scary movie - it's good fun family entertainment.

We really enjoyed this film - it was great for the adults to relive the excitement of seeing it as children, and for the kids, this film stands the test of time and measures up to modern day kids sci-fi such as Avatar.