How to Train Your Dragon 2 - review 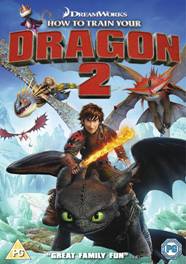 We watched this for a pizza and movie party with ten eight year old boys and girls (and two six year olds) and it kept them all hooked for almost the whole time (except for when they got distracted by the hamster waking up), which is testimony to the quality of the film.

The boys and girls loved it equally.  The story rollicks along, there is masses of action to follow, there are nail-biting moments

and there are lots of laughs (mainly from the embarrassing Mum sitting in the corner, viz, me).

The characters have all aged in the past few years since the first film, much like the audience, and the story picks up with a harmonious relationship between dragons and humans, which is spoilt by the presence of a hypnotising mega-dragon beast who tries to turn the dragons against the humans.

There are a few twists, including the killing off of a major character, which surprised me.  I expected the person to recover miraculously or not really be dead as is usual in animated films, but apparently not.

The film opens with a breath-taking sequence following the swooping flights of the dragons.  The graphics throughout are brilliant!  We love the How to Train Your Dragon books and both the films. If you haven’t discovered them yet, you’ve got a treat in store.  I’d suggest the book series would have an age range of about 7-12, but the films are accessible to younger audiences, although definitely worthy of a PG rating for the battle-scenes and occasionally sad outcomes  That said, no one in our audience seemed at all bothered by the fighting and death.  It all added to the excitement of the movie.

How To Train Your Dragon 2 is out now on DVD