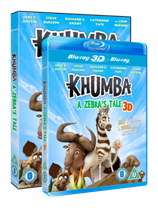 I should start by saying that Charlie said this was one of his favourite films ever. It only dropped in Amelia’s ratings because [spoiler alert] the mother dies, somewhat predictably, it has to be said, very early on so she felt it was sad. I think what appealed to Charlie was the sheer number of African animals in the film, set against a beautiful South African landscape. I’m not sure he noticed the impressive African music in the background, but I appreciated it.

I’m also not sure the children noticed the number of references to other films in the plot. See if you can see them too from this description of the plot: A zebra, Khumba, is born with only half his stripes. Cue identity issues and debate as to whether it’s good to be different or not. Khumba, after the sad and untimely demise of his mother, and encouraged by a legendary preying mantis, sets off on a road trip to find the magic lake that will restore his stripes. He is accompanied, funnily enough, by two other animals, one of whom is a humorous Michael Caine impersonating ostrich (not intentionally I think, but he does have a London accent). Unfortunately, things do not go entirely smoothly as there is a vicious big cat, with his own axe to grind, who follows the three through their roller coaster adventures. I’ll leave it up to you to guess whether the zebra achieves his goal of finally fitting in with the herd or decides he is better being the person he was born as; and whether his arch enemy meets an untimely end, despite the best efforts of Khumba to save him, or, rather, dies as Khumba finally gets the upper hand and carries out a final act of revenge.

It’s a tired format and there is a United Nations plethora of accents amongst the animals, not all of whom are that intelligible. My favourites were the Afrikaaner Springboks, who form a scrum to try to get through a fence. The film is supported by the South African DTI and is created by a South African company and certainly makes the most of the beautiful South African landscape. The graphics are professional and the story is quite gripping, if entirely predictable and unoriginal. This is a film to pass the time in the long summer holidays, particularly if you have animal-loving children. As an adult, I’ve been spoilt by the humour and quality of children’s films such as Toy Story, Shrek and Megamind. However, if your child has not yet seen Ice Age, the Lion King or Madagascar, this is a decent introduction to the animal roadtrip format.

ORDER THE DVD NOW FROM AMAZON