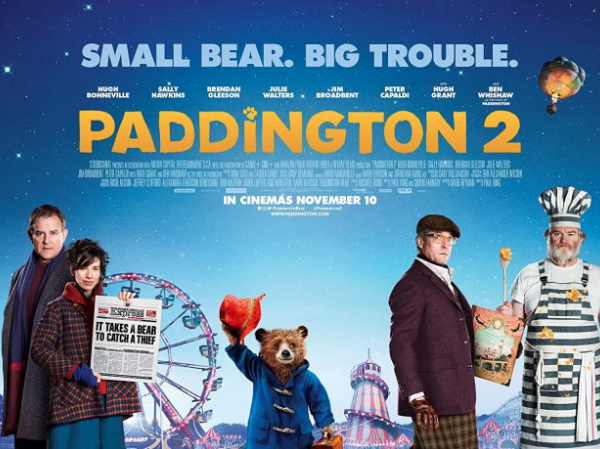 Everyone’s favourite bear is back in Paddington 2! Anyone who has seen the original film, knows that it was an excellent, so it was with trepidation that I watched Paddington 2 not expecting this to be as good as the original.

The film begins with Paddington, now happily settled with the Brown family and a popular member of the local community, on a mission to buy a birthday present for his beloved Aunt Lucy who rescued and raised him as a young cub in Peru.

Paddington picks up a series of odd jobs to buy the perfect present for his Aunt Lucy's 100th birthday. He starts off as a barber’s assistant-with hilarious consequences and after being fired moves on to a window washer.

Working diligently to save up money, the gift is stolen from the films villain, washed out actor, Phoenix Buchanan. Phoenix is the master of disguise and is brilliantly played by Hugh Grant.

When Paddington is wrongly accused of the theft of this precious book, he gets thrown in jail! While in jail, he manages to charm his fellow violent prisoners. The jail scenes are some of the most hilarious in the film including knuckles McGinty ( ‘Nuckles’).

The Brown family and Paddington’s fellow prisoners work together to prove his innocence and to catch the real thief!

This is a feel good film for adults and kids alike. Paddington is a brilliant role model, always seeing the best in people and always helping others and imparts some great lessons for children.

Throughout the film, the cinema erupted in laughter! We left the cinema feeling happy and uplifted. A must see for any age!

Paddington 2 will be released in UK cinemas on Friday November 10, 2017.