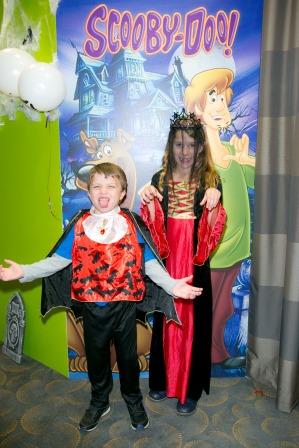 There is no gothic stone left unturned nor any humorous, self-referential dig left out in this latest thriller from the Scooby-Doo franchise. Franken Creepy was a hit with Charlie and Amelia who are, to be fair, huge Scooby-Doo fans.  But, then again, who isn’t?  Amelia was thrilled by the ‘creepy’ nature of the film.  Charlie just lapped it up, seemingly unperturbed by the ghoulish housekeeper or by the possibility of the alarmingly vampish Velma extracting a brain from Scooby and Shaggy (reasoning that between them they actually had a whole brain) to insert into the obligatory monster.

The graphics are retro simple, in keeping with the other Scooby-Doos, but the references are entirely 21st century.  One of my favourite bits was when Velma had finished revealing her dark secret to Fred and Daphne only to look up and see them both looking at their phones, checking out her references on the internet.

This is a movie for Scooby-Doo fans both new and established.  The opening credits list a number of catchphrases which Scooby-Doo die hards may enjoy identifying, including the old favourite, ‘I would have got away with it if it weren’t for you meddling kids’.  It is not afraid to mine the rich seams of humour which have seen it triumph in the ratings over the years, from Fred’s love of the Mystery Machine to Daphne’s love of her appearance, whilst sending up gothic films down the ages, querying where the organ music has suddenly come from and showing the house keeper swallowing the only key to the castle.  But with references to web chats and carbon footprints, along with a teenage boy highlighting all the continuity errors in the movie at the end, it is clearly a contemporary movie.

I don’t think it is a spoiler with a Scooby-Doo film to suggest that we firmly suspect that the monster isn’t real.  The question is really, who is it and why are they doing what they’re doing?  The construction and unravelling of the plot in Franken Creepy are tremendous fun.  Franken Creepy is firmly directed at the Hallowe’en market and is a DVD to buy this year and bring out annually, if not more often.  It is fun and funny, action packed and, to an 8 year old, deliciously creepy.