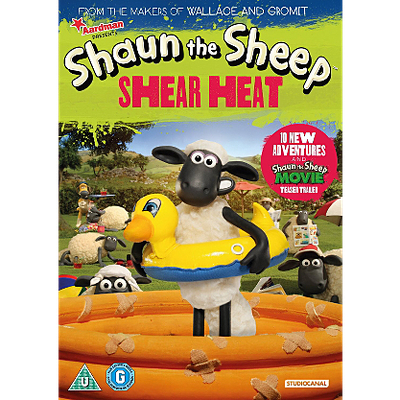 Shaun The Sheep – Shear Heat is a new assortment of episodes, telling of the daily adventures of Shaun and his farmyard pals.

For those who are not familiar with the character, Shaun the Sheep is a mischievous little chap, who gets up to all kinds of antics with the rest of his flock, often coming up against the wrath of Bitzer, the somewhat officious sheepdog, and the piggy farmyard bullies.  The show is one of a line of successes from Aardman Animations, who produced Wallace and Gromitt, Creature Comforts and Chicken Run. They’ve won four Oscars, so you ca rest assured that with Shaun The Sheep, you’re onto a winner.

Unlike many TV programmes written for children, Shaun The Sheep has universal appeal and is really, really funny for little ones and adults alike.  The characters and animation are absolutely brilliant, and the storylines sweet but not sugary, humorous, and have so many recognisable moments from daily life which will resonate with children and grown-ups. Also, the episodes are quite short – around 7 -8 minutes each one, so great for those with fleeting attention spans, or for watching one or two before bed or a meal.

One of the cleverest and funniest bits of the show is how all the animals of the farm cunningly disguise their double lives from the seemingly oblivious farmer. In one moment, they might all be enjoying a game of rounders in the farmyard, but as they hear the approach of the farmer in his tractor (the oncoming sound of rave music from his stereo alerts them) they manage to transform the scene back into a simple field of peacefully-grazing animals.

Shear Heat is a brilliant collection of some of the best episodes from the 2012 series. So do note - these are not new episodes,  if you already own some Shaun The Sheep DVDs, you should check you haven’t seen these specific episodes already. But it’s a good place to start for an introduction to Shaun and his friends.

SHAUN THE SHEEP - SHEAR HEAT IS NOW AVAILABLE ON AMAZON