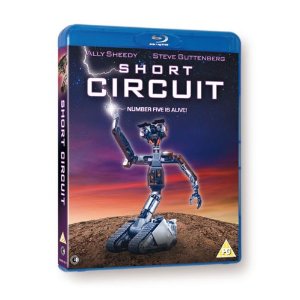 What is the film about?

Number 5 is alive in the classic 80s comedy sci-fi adventure Short Circuit which comes to Blu-ray for the first time courtesy of Second Sight Films.

An experimental military robot escapes after being struck by lightening, giving it human intelligence. He escapes and finds a home with madcap Stephanie Speck (Ally Sheedy), who believes he is an alien, but hot on his trail are scientists Newton Crosby (Steve Guttenburg) and his assistant (Fisher Stevens), who must get to their creation before the army, who plan to put Number 5 out of service permanently.

Follow Number 5 in his zany escapades in Short Circuit, a fantastic family film that will be the perfect gift for kids of all ages.

· Behind the scenes featurette

Review by the What To Do With The Kids Team

It was a real treat for us to review this film. I remember watching it with my family one weekend as a kid when we hired it on video for a Saturday night treat - those were the days!

There is always the risk that, watching a childhood favourite as an adult could be a let-down. Furthermore, watching this film with an 8 and 10 year old, we worried that the special effects that once amazed us would be unimpressive to a new generation in today's world of cgi cinema.

Admitedly the film looks a bit old-fashioned - it's 30 years old - but 3 decades has not changed the fact that it is funny! We laughed, the kids laughed, they loved Johnny 5, and we are told they are still amusing their mum and dad with the new set of catchphrases they picked up!

The storyline is kid-friendly, Steve Guttenberg takes a great part (whatever happened to him?) and overall this is classic family entertainment.

Why not treat yourself to the Blu-Ray version and watch it in all its glory?