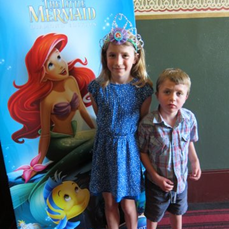 We were very fortunate to be invited on behalf of What to Do with the Kids to an exclusive screening of the 25th anniversary Blu-ray release of The Little Mermaid at The Royal Albert Hall. The film was accompanied by the South London Youth Orchestra and a few members of the New London Children’s Choir.

Amelia and Charlie loved the film. They didn’t notice the slightly dated graphics (1980s computer animation not quite being up to the Pixar era) or wince at the storyline that requires Ariel to get the prince to fall in love with her not for her brilliant wit or great mind, but for her beauty. That gripe out of the way, I thought the film was really entertaining with an engaging storyline and a fantastic musical score, which was highlighted by the orchestra. I even laughed out loud several times, to my daughter’s embarrassment, particularly at my and Charlie’s favourite scene, when Sebastian the crab is being chased by a demented French chef. As someone familiar with the original Hans Christian Andersen version, I was rather concerned at the potential tragedy at the end of the film, but I needn’t have worried as this was Disney and authenticity was not required.

The basic story is an aqueous Romeo and Juliet. A mermaid follows her fascination for all things human, which is strictly forbidden by her father, to the extent that she falls in love with the first human she meets, who handily happens to be a dashing prince. However, the course of true love does not run smooth as they are thwarted (of course) by the evil sea witch. I found myself identifying with Ariel’s father as he didn’t know how to handle his disobedient daughter, and ended up making things much worse, which is often the outcome I achieve.

The film would be a great way to pass a rainy autumnal afternoon. It’s a treat for children and contains just enough humour to keep their parents happy as well. In a post-Shrek world, it’s slightly dated. As Shrek highlights, ‘why does everything have to happen before sunset?’ But it’s a fun, entertaining film which my children loved and I have no doubt that they would enjoy it time after time.