The Three Stooges - Reviewed for What To Do With The Kids 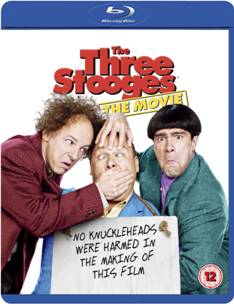 When I was a kid, our Saturday morning TV usually consisted of a couple of hours of Going Live, followed by old black & white US comedies on Channel 4, such as I Love Lucy, Blondie, and my particular favourite, The Three Stooges.

I had mixed feelings when I heard that a film version had been made - happy that Larry, Curly and Mo would be brought to a new generation of kids, but wondering if it would be possible to make a film which would match up to the original series.

Told in 3 episodes, the story follows Larry, Curly and Mo, from the early years spent in an orphanage to 25 years on when the guys head out into the world on a quest to raise $830,000 dollars to save the children's home. The story line is not very complex - perfect for easy family viewing, and it is packed with silly jokes and slapstick scenes which will make the whole family giggle and cringe all at the same time.

For any parents and grandparents who remember the original, you will probably find you enjoy this film more than you expect. It would be hard to capture the magic of those old black and white episodes, but you will be surprised by how similar the new Larry, Curly and Mo are to the original cast. In fact the line up in this film is really impressive - it includes Larry David (Curb Your Enthusiam, Seinfield), Jane Lynch (Dino Times, Glee), Sofia Vergara (New Year's Eve, Modern Family) and Will Sasso (How I Met your Mother).

It would be advisable to remind your children at the outset of this film that all the stunts in the film are not for real and that they should not be re-enacted at home. There is an explanation about this at the end, but just in case for some reason you don't make it all the way through!

This is a great film for family viewing - check it out!